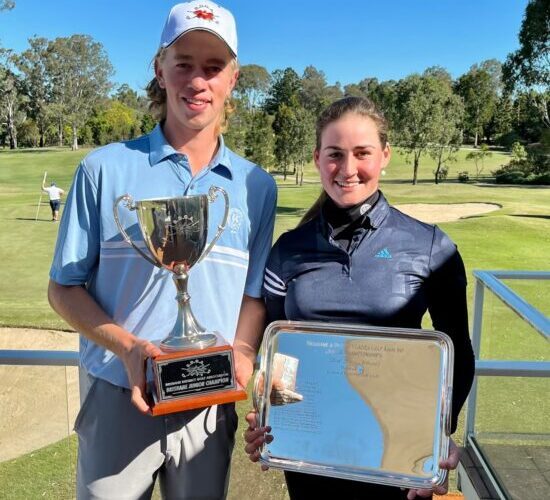 The two-day Championships, hosted by BGC for the second successive year, were completed earlier today (Friday) and Aspen and Chris saluted on the eve of their respective departure overseas. Both are heading to college is the US.

Chris, the defending Junior Champion from last year, had rounds of 74-72 for a two-over par 36-hole total of 146. He streeted the field by eight shots.

“I played solid in the conditions. The wind blew around 30 to 40 kilometres on Thursday, but it was calmer today,” said Chris, who admitted to having a ‘shank’ on each day of the tournament.

Aspen found the going a little tougher, with scores of 80 and 78, and won the closed gross for the best from juniors in the BDLGA area. The overall Championship winner was Emily Martin from Emerald Lakes.

“I was pleased with the way I played, but like everyone I struggled a little in the windy conditions,” said Aspen, the reigning BGC Women’s Champion.

“But considering how much rain we have had recently, the course was in really good condition.”

The event will be Aspen’s final competition golf before she leaves for the US on Thursday.

The 18-year-old will study Sports Psychology at Redlands Community College in Oklahoma.

Chris is also heading to Oklahoma, but not until August and after he has played four rounds of the BDGA Pennant season. The fellow 18-year-old will study Sports and Exercise Science at Cameron University. – TONY DURKIN