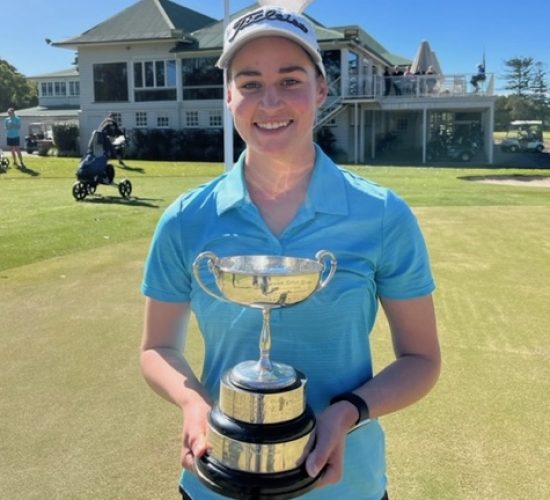 She had to hold her lead – and her nerve – for just on three weeks, but Aspen Sugars has prevailed in heavy conditions underfoot to become The Brisbane Golf Club’s 2022 Women’s Champion.

The 18-year-old, who will study Sports Psychology at Redlands Community College in Oklahoma from next month (July), shot rounds of 79, 75, 72 and 81 to win the Championship by a commanding seven shots.

But because of continuous rain between the third and fourth rounds and with Aspen holding a five-shot lead, she had to wait three weeks before claiming her second major senior title.

Three years ago, she won the Women’s Championship at Windaroo.

Aspen, who led from the outset, beat home two other youngsters, 15-year-old, Safina Kyprianou who was the runner up, and Angelina Drakos (14) who finished third. Angelina finished the Championship with the best nett score.

“It was a real pleasure to watch these girls in action – they play so beautifully. They hit the ball so far and their skill level is amazing,” she said.

“Having such talented young players as members of our club is wonderful.”

Aspen, whose handicap following the Championships is her lowest-ever at 0.8, was the only player in the field to par the course during the four rounds, with her 72 in round three the undoubted highlight.

And she credits the facilities and TBGC, as well as the experience of playing on various courses over recent years, for the development of her game.

“I have been a member at Brookwater, McLeod, Windaroo, Royal Pines and Brisbane since I started playing at age 10, and I have gained something valuable from regularly playing each course,” she said.

“The different courses and the challenges they present have really helped develop my game.”

Following her two years studying at Redlands College, Aspen hopes to gain entry to a tier one college to further her studies and further advance her golf.

“When I was in Year Nine, I made the decision to attend college in the US, so I had to get both my grades and my golf game in order,” she said.

“My ultimate goal is to turn professional, but when that happens is not an immediate priority.” – TONY DURKIN