An Evening with David Finlayson

The Brisbane Golf Club is proud to announce it will host An Evening with David Finlayson on Friday, 28 May 2021 in The Tennyson Room.

David, who is the Director of Culinary at Howard Smith Wharves will collaborate with our very own Executive Chef, Joshua Williams. This very special evening will feature a four-course meal designed and prepared by both chefs with each of the courses expertly matched with wines from numerous regions.

Originally from Scotland, David oversees the entire food and beverage offerings for Howard Smith Wharves which includes up to 10 different venues. In 2019 he won the Restaurant & Catering QLD/NT Chef of the Year Award. Prior to his role at Howard Smith Wharves, David was the operations mastermind behind Melbourne’s iconic Chin Chin and Kisume, influencing the Melbourne and Sydney food scene for a number of years including the set-up of the development of Chin Chin in Sydney.

David is a highly regarded and respected Executive Chef and Operations Director throughout Australia and overseas. He has also worked at London’s Michelin Starred restaurant Pied a Terre.

This is a great opportunity for Members to experience a menu especially prepared by two outstanding chefs. Members should book early to ensure they don’t miss out on what will be one of the best events of the year.

Where: The Tennyson Room | The Brisbane Golf Club

Bookings: Pre-paid bookings are essential. Please call the Office on 07 3848 108 or email geoff@brisbanegolfclub.com.au.

Your food and wine on the evening will be as follows:

Potatoes in foil cooked over coals

Members can see David on an upcoming episode of Channel 10’s Taste of Australia with one of Australia’s best-loved TV foodies and former Masterchef contestant, Hayden Quinn on Sundays from 4.30pm. 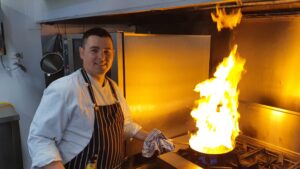