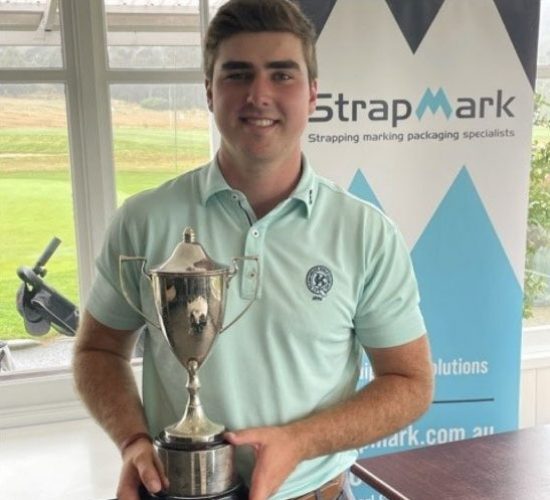 When he won the South Australian Amateur Sam described his victory as the ‘biggest win and biggest thrill’ of his burgeoning golf career, but puts his success at the weekend a very close second.

“The South Australian field contained some big-name amateurs and, as a breakthrough win on the big stage, it will always remain very special,” he said.

“But apart from my second round 73 last weekend, I played some very good golf and beat home a real talent on the fourth day. Toby and I both shot five-under bogey-free final rounds, which at Kingston Beach is pretty impressive.

“It was a big thrill and gave me tremendous satisfaction.”

And ever the realist, Sam had a simple explanation for his disappointing two-over 73 on day two of the Championship – his putter did not work.

When he won the 2020 South Australian Amateur, Sam announced he would turn professional ‘when I’m good enough’.

And now that he has won another State title following his breakthrough BGC Men’s Club Championship trophy, he remains undecided where his golfing future lies.

“I am confident I will know when the time is right,” said the coolheaded young man who moved north from Sydney with his family six years ago.

In the meantime, Sam has a full schedule ahead starting with the Riversdale Cup in Victoria next weekend (from Thursday, March 10). Following that is the NSW Open at Concord Golf Club, courtesy of an invitation from his equipment sponsor, Srixon, and then the Australian Amateur at Cranbourne, Victoria, at the end of the month.

NOTE: Sam’s first BGC Championship in the club’s historic 125th year came at his fourth appearance in the play-offs, and after winning three Junior titles in 2017, 2018 and 2019.