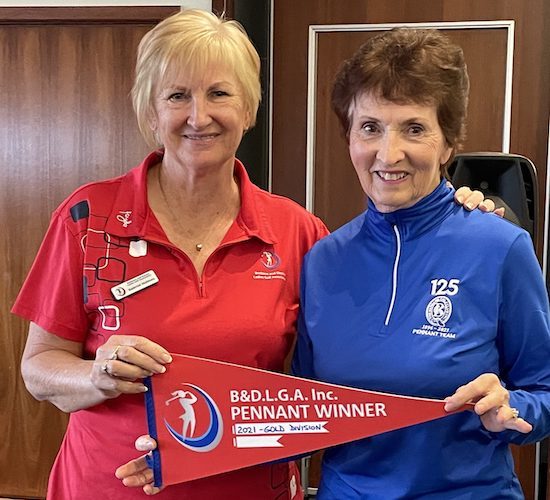 Five teams from BGC will contest the inter-club events in five different divisions, with Gold, Silver and Weekend Silver teams defending the Pennant won last year. Three teams – Gold, Silver and Bronze – kick off the 2022 season when they meet Indooroopilly, Indooroopilly and Keperra, respectively, on Friday.

And while buoyant at the prospect of the club again performing well, Women’s Captain Janet Nathanson is not prepared to be as bullish as her predecessor Helen Caris, who last year triumphantly forecast ‘our women’s team is awesome’.

“Not being as aware of the quality of our opposition as Helen, I’d prefer to refrain from making any bold predictions,” she quipped.

“But knowing the determination among our girls, and the talent we have, I’m sure we will again be very, very competitive. I’m certainly hoping we can at least emulate last year’s success.”

Gold, the No.1 ranked team representing the club, will defend their title against teams from Indooroopilly, Nudgee, McLeod and Pacific. Losing just one of their six matches last year, Gold will play four times in 2022 and all matches will be contested off scratch, with the maximum handicap 12.

Three members of last year’s winning team – former Club Champion Lisa Edgar (+0.8), Hannah Reeves (+2.3), and current Club Champion Lesa Lambert (8.4) will line up in BGC colours again and will be joined by Safina Kyprianou (2.7) and Ashleigh Hay (9). Sofina, who is 15 years of age, becomes the first junior to represent BGC in the top Pennant Division.

Weekend Gold also have two youngsters in their team. Angelina Drakos will be joined by 18-year-old Aspen Sugars, who has just finished Grade 12 and will be heading to the USA in July to start University studies.

This competition, which is played between teams from BGC as well as Nudgee, Oxley, Royal Queensland and Pacific, does not start until May 15.

Silver Zone One will defend their 2021 title against Nudgee, Pacific, McLeod, Indooroopilly and Keperra. There is no minimum handicap, with maximum mark being 18.5.

Bronze Zone One plays seven matches in their Division in 2022, competing against teams from Keperra, Pacific, Gailes, Ashgrove, McLeod, Indooroopilly and Oxley. Minimum handicap is 18.6, with the maximum 26.

NOTE: Apart from Gold Division, where competition is played off the stick, BDLGA Pennant matches are played with full handicap difference. – TONY DURKIN

PrevPreviousNews from The Red Tees | April 2022
NextCourse Architect Appointed Next